As a valued Canady’s customer, we want to do all we can to keep you up to date and informed of governmental policy changes that may impact the way you heat and cool your home. The latest regulation will go into effect on January 1, 2023 and we encourage you to read the following information and reach out to us with any questions you may have.

What does SEER stand for?

Seasonal Energy Efficiency Ratio: a measure of a system’s cooling performance. The higher the SEER rating, the more energy-efficient the equipment. It represents the total heat removed from the conditioned space during the annual cooling season, expressed in Btu, divided by the total electrical energy consumed by the air conditioner or heat pump during the same season, expressed in watt-hours.

Is this a new regulation?

Minimum energy efficient standards first went into effect in 2015 and set standards for central cooling air conditioners in the northern United States and then separate standards for the Southern U.S. The new standards, known as SEER2, mark the first change to these standards since they were initially put into place.

SEER and SEER2 were both developed by the U.S. Department of Energy (DOE). As of January 1, 2023, SEER2 changes will include new standards for efficiency levels for newly manufactured residential and commercial HVAC equipment such as air conditioners, furnaces and heat pumps. Among the most noticeable changes are those that apply to testing conditions. The new testing methods of SEER2 will better represent realistic operating conditions.

The Department of Energy has established a new set of testing criteria & procedures (M1) to take effect January 1, 2023. One of the main differences between SEER and SEER2 is the testing conditions for each rating system. The new testing procedure (M1) will ensure that units are tested to better reflect the realistic field conditions of installed HVAC equipment. : On August 24, 2016, the U.S. Department of Energy (DOE) published a supplemental notice of proposed rulemaking (SNOPR) to amend the test procedure for central air conditioners and heat pumps. The new appendix M1 establishes new efficiency metrics SEER2, EER2, and HSPF2 that are based on the current efficiency metrics for cooling and heating performance, but generally have different numerical values than the current metrics.

This change will allow for a new testing method that better represents actual operating conditions, and it will coincide with a 1% increase in baseline efficiency. That means a SEER2 and HSPF2 rating will be lower than the equivalent SEER and HSPF rating. As an example, a heat pump rated at 15 SEER and 8.8 HSPF equates to 14.3 SEER2 and 7.5 HSPF2.

What are the new standards?

Specifically, residential systems in the northern U.S. will require a 14 SEER rating while the southern states will require a 15 SEER due to the higher use of cooling in this region.

How Will I Be Affected?

The goal of the program is to help those households using central air conditioners or heat pumps save on energy costs. The Department of Energy (DOE) has estimated a collective savings of up to $12.2 billion on energy bills over the next 30 years. In order to achieve this goal, all new systems will be required to be more energy efficient under the SEER2 standard. To meet these new requirements, manufacturers are redesigning system components which may result in a further reduction in inventory and increased costs, especially on base systems.

What are the specific changes for the Southeast?

Any equipment that does not meet these standards by January 1, 2023 cannot be installed or sold in the Southeast region.

How can I be sure my new system is compliant?

We are required to ensure our existing inventory is compliant with the new efficiency standards. All equipment comes with an energy guide label, which will confirm a specific unit’s efficiency. If a range is listed, you’ll want to be sure the least efficient rating listed is compliant. Additionally, the FTC published updates to Energy Guide labels for all 2023 compliant products to include SEER2, EER2 (Energy Efficiency Ratio) and HSPF2 (Heating Mode Efficiency Counterpart) ratings.

Am I required to upgrade my HVAC to meet SEER2?

If your unit is 10 years or older, you may want to consider your options, simply because, these older non-compliant units – along with the parts to repair them – will be phased out. At Canady’s, we offer free estimates on HVAC replacements to customers in our service area and encourage you to contact us to find out more.

The Energy Policy and Conservation Act (EPCA) of 1975 first gave the U.S. Department of Energy authority to develop, revise, and implement minimum energy conservation standards for appliances and equipment. EPCA requires DOE to periodically amend energy conservation standards for certain equipment, but only if the amendments are energy-saving, technologically feasible, and economically justifiable. The National Appliance Energy Conservation Act of 1987 established the first minimum efficiency requirements for central air-conditioning and heat pump equipment sold in the United States. These standards went into effect in 1992, and later updates went into effect in 2006 and 2015.

The FTC requires mandatory labels for some home appliances to help homeowners and consumers compare energy usage and costs of equipment and appliances. The FTC published updates regarding EnergyGuide labels – to include language regarding SEER2, EER2 & HSPF2. All 2023 compliant products will include a new EnergyGuide label with the SEER2, EER2 and HSPF2 ratings. 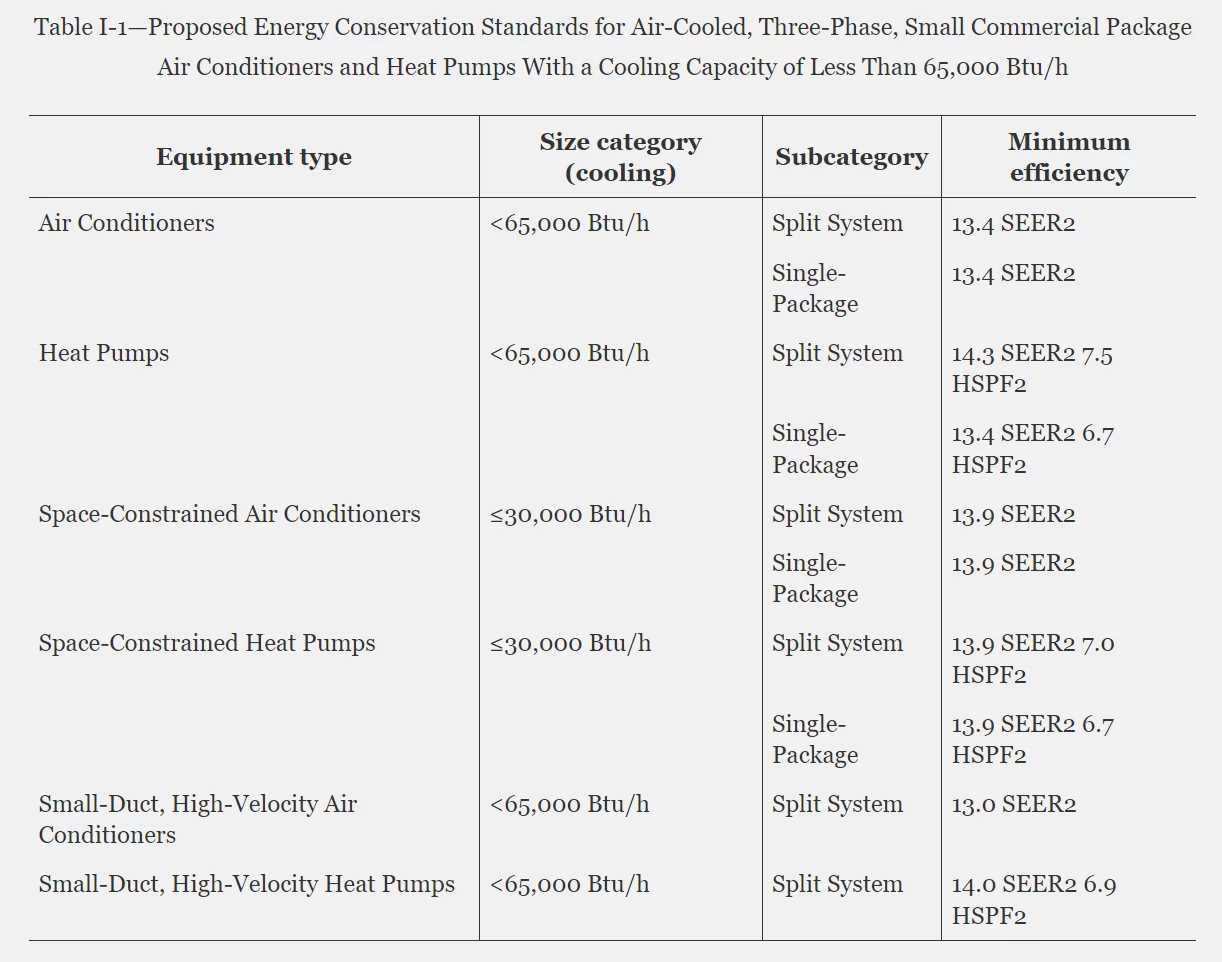